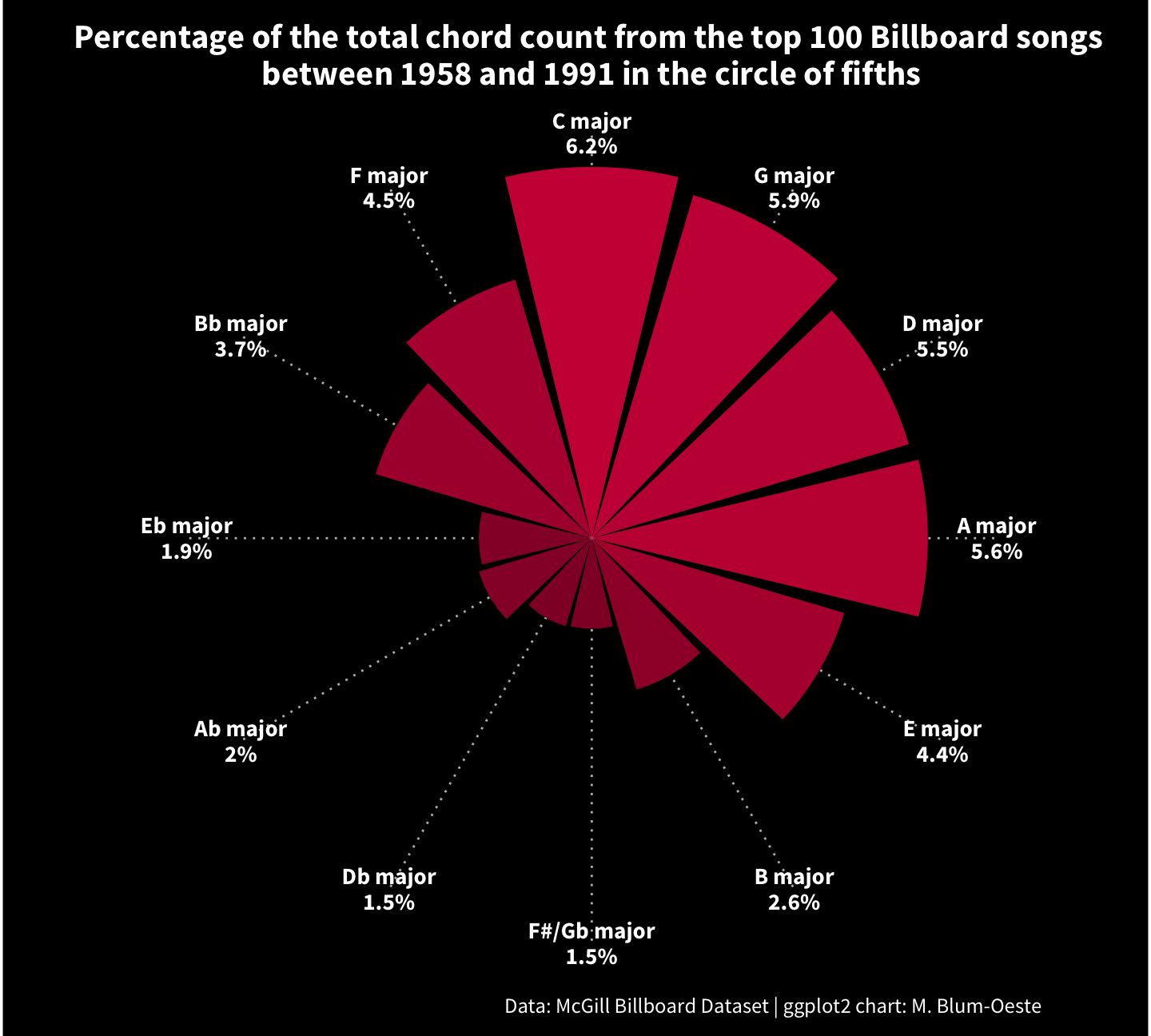 Hey everyone, This is a guided project on gathering, cleaning and transforming musical data and visualizing it. I somehow got the opportunity to get the access to this project on Data Camp. Right now, it is for premium users as in you cannot access it via free account. But, Data Camp does time to time gives free access to such projects, well yeah occasionally. You shoud definitely look out for such opportunities on these platforms if you are really serious about enhancing your core skills. But you need not worry, because for this project, I am here to give you complete access to it.

Let us get started!

How do musicians choose the chords they use in their songs? Do guitarists, pianists, and singers gravitate towards different kinds of harmony?

We can uncover trends in the kinds of chord progressions used by popular artists by analyzing the harmonic data provided in the McGill Billboard Dataset. This dataset includes professionally tagged chords for several hundred pop/rock songs representative of singles that made the Billboard Hot 100 list between 1958 and 1991. Using the data-wrangling tools available in the dplyr package, and the visualization tools available in the ggplot2 package, we can explore the most common chords and chord progressions in these songs, and contrast the harmonies of some guitar-led and piano-led artists to see where the "affordances" of those instruments may affect the chord choices artists make.

2. The most common chords

As seen in the previous task, this is a tidy dataset: each row represents a single observation, and each column a particular variable or attribute of that observation. Note that the metadata for each song (title, artist, year) is repeated for each chord -- like "I Don't Mind" by James Brown, 1961 -- while the unique attributes of each chord (chord symbol, chord quality, and analytical designations like integer and Roman-numeral notation) is included once for each chord change.

A key element of the style of any popular musical artist is the kind of chords they use in their songs. But not all chords are created equal! In addition to differences in how they sound, some chords are simply easier to play than others. On top of that, some chords are easier to play on one instrument than they are on another. And while master musicians can play a wide variety of chords and progressions with ease, it's not a stretch to think that even the best musicians may choose more "idiomatic" chords and progressions for their instrument.

To start to explore that, let's look at the most common chords in the McGill Billboard Dataset.

3. Visualizing the most common chords

Of course, it's easier to get a feel for just how common some of these chords are if we graph them and show the percentage of the total chord count represented by each chord. Musicians may notice right away that the most common chords in this corpus are chords that are easy to play on both the guitar and the piano: C, G, A, and D major — and to an extent, F and E major. (They also belong to keys, or scales, that are easy to play on most instruments, so they fit well with melodies and solos, as well.) After that, there is a steep drop off in the frequency with which individual chords appear.

To illustrate this, here is a short video demonstrating the relative ease (and difficulty) of some of the most common (and not-so-common) chords in the McGill Billboard dataset.

Just as some chords are more common and more idiomatic than others, not all chord progressions are created equal. To look for common patterns in the structuring of chord progressions, we can use many of the same modes of analysis used in text-mining to analyze phrases. A chord change is simply a bigram — a two-"word" phrase — composed of a starting chord and a following chord. Here are the most common two-chord "phrases" in the McGill Billboard dataset. To help you get your ear around some of these common progressions, here's a short audio clip containing some of the most common chord bigrams.

5. Visualizing the most common chord progressions

We can get a better sense of just how popular some of these chord progressions are if we plot them on a bar graph. Note how the most common chord change, G major to D major, occurs more than twice as often than even some of the other top 20 chord bigrams. 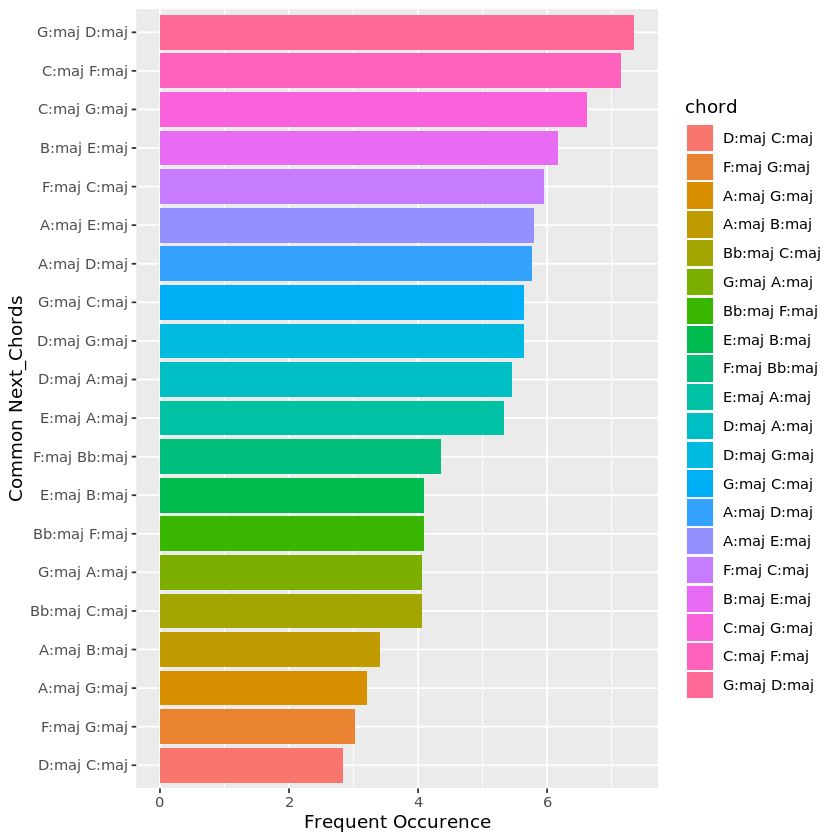 6. Finding the most common artists

As noted above, the most common chords (and chord bigrams) are those that are easy to play on both the guitar and the piano. If the degree to which these chords are idiomatic on guitar or piano (or both) determine how common they are, we would expect to find the more idiomatic guitar chords (C, G, D, A, and E major) to be more common in guitar-driven songs, but we would expect the more idiomatic piano chords (C, F, G, D, and B-flat major) to be more common in piano-driven songs. (Note that there is some overlap between these two instruments.)

The McGill Billboard dataset does not come with songs tagged as "piano-driven" or "guitar-driven," so to test this hypothesis, we'll have to do that manually. Rather than make this determination for every song in the corpus, let's focus on just a few to see if the hypothesis has some validity. If so, then we can think about tagging more artists in the corpus and testing the hypothesis more exhaustively.

Here are the 30 artists with the most songs in the corpus. From this list, we'll extract a few artists who are obviously heavy on guitar or piano to compare.

There are relatively few artists in this list whose music is demonstrably "piano-driven," but we can identify a few that generally emphasize keyboards over guitar: Abba, Billy Joel, Elton John, and Stevie Wonder — totaling 17 songs in the corpus. There are many guitar-centered artists in this list, so for our test, we'll focus on three well known, guitar-heavy artists with a similar number of songs in the corpus: The Rolling Stones, The Beatles, and Eric Clapton (18 songs).

Once we've subset the corpus to only songs by these seven artists and applied the "piano" and "guitar" tags, we can compare the chord content of piano-driven and guitar-driven songs.

Let's take a look at any difference in how common chords are in these two song groups. To clean things up, we'll just focus on the 20 chords most common in the McGill Billboard dataset overall.

So with all the appropriate caveats, it seems like the instrument-based-harmony hypothesis does have some merit and is worth further examination. 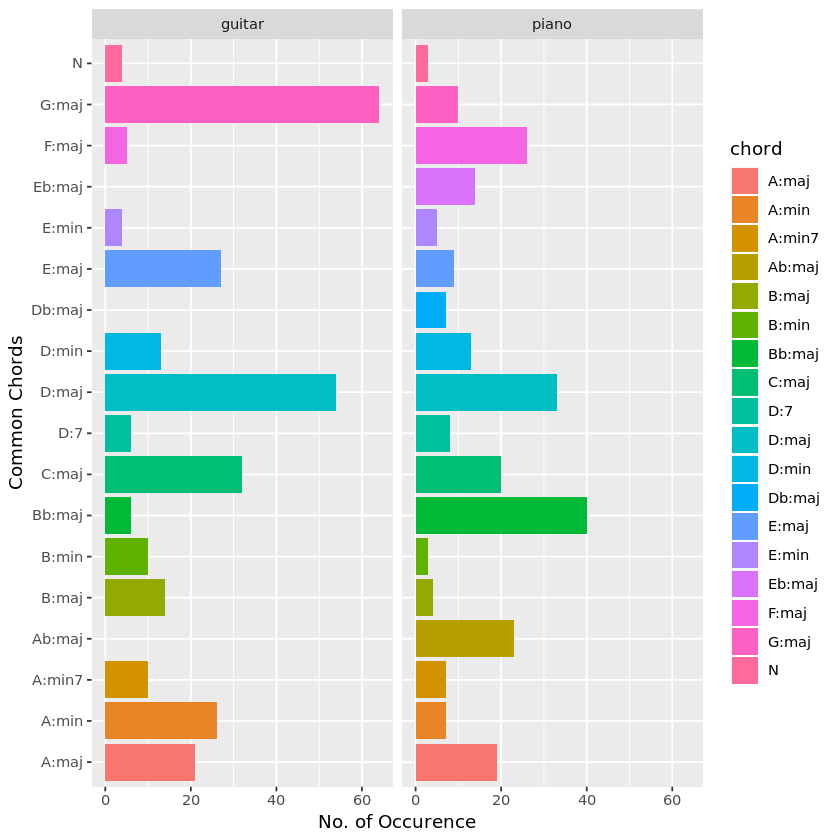 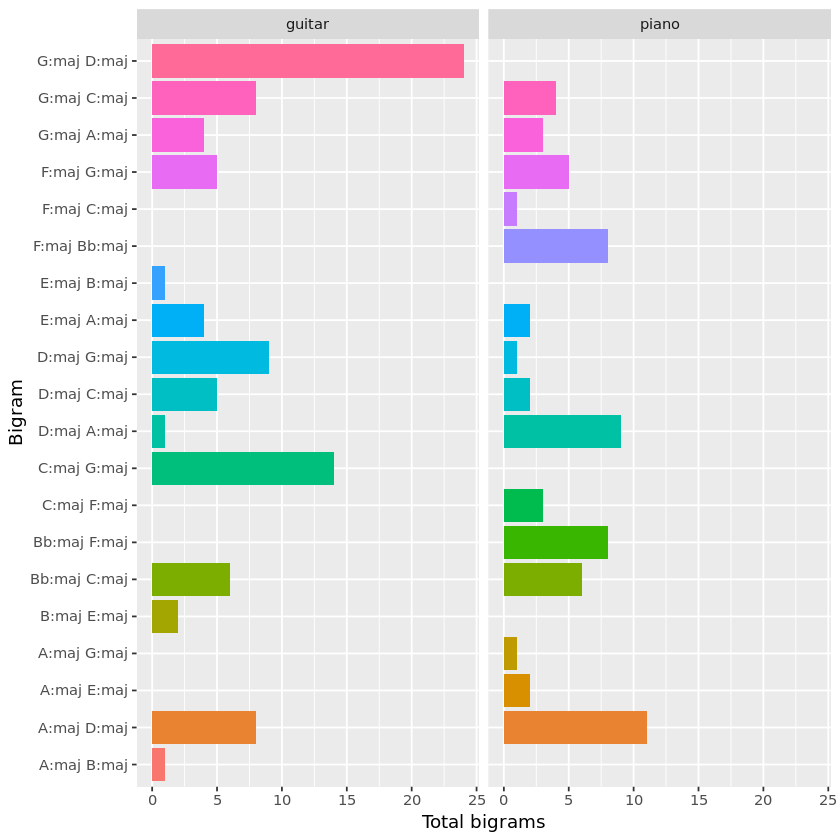 We set out asking if the degree to which a chord is "idiomatic" on an instrument affects how frequently it is used by a songwriter. It seems that is indeed the case. In a large representative sample of pop/rock songs from the historical Billboard charts, the chords most often learned first by guitarists and pianists are the most common. In fact, chords commonly deemed easy or beginner-friendly on both piano and guitar are far and away the most common in the corpus.

We also examined a subset of 35 songs from seven piano- and guitar-heavy artists and found that guitarists and pianists tend to use different sets of chords for their songs. This was an extremely small (and likely not representative) sample, so we can do nothing more than hypothesize that this trend might carry over throughout the larger dataset. But it seems from this exploration that it's worth a closer look.

There are still more questions to explore with this dataset. What about band-driven genres like classic R&B and funk, where artists like James Brown and Chicago build chords from a large number of instruments each playing a single note? What about "progressive" bands like Yes and Genesis, where "easy" and "idiomatic" may be less of a concern during the songwriting process? And what if we compared this dataset to a collection of chords from classical songs, jazz charts, folk songs, liturgical songs?

There's only one way to find out!

This project involves all the basic techniques but are really crucial for data collection and cleaning. All the visualizations were made here.

Till then, any feedbacks, queries or recommendations are appreciated on any of my social media handles.

Refer to my Github Profile for solutions!

Powered by Hugo with theme Dream.

Hey Folks! I’m Shrishti Vaish and I’m delighted that you visited my page. Currently pursuing Bachelors in Computer Science with Honours from the University of Delhi, India. During my final year at college, I had developed keen interest in Data Science knowing its worth and demand in the coming future.

No better tool that I can find other than R is for statistical analysis. I use R extensively for any of my data science projects.

Well, I am new to blogging and will be posting about a lot of it.

Hey everyone, I am working on a project, a case study on the Work Status and Condition of Women during the Pandemic. This is a project in R for analysis and visualization. Kindly fill the form.

The details are provided in the form itself. Kindly support and share the link with your connections as well.